After being delisted in 2015, EVRY was relisted on the Oslo stock exchange (OSE) on 21 June 2017. As of year-end 2017 the company had a market capitalisation of NOK 12.1 billion, and the IPO in June was one of the largest IPOs in the Nordics during 2017.

EVRY trades with the ticker code “EVRY” at OSE, and the share has been included in the Oslo Stock Exchange Benchmark Index since 1 December 2017. As EVRY operates in the Nordic IT software and services segment, it was also included in the OSE Software and Services Index and OSE Information Technology Index from the same date. As one of the largest listed IT companies in Norway, EVRY is also included in other indices on the Oslo stock exchange, such as the OSE All Share Index, the OSE Mutual Fund Index and the OSE Mid Cap Index.

EVRY was listed on 21 June 2017 with an issue price of NOK 31.00 per share. EVRY’s share price rose 4.8 percent in the period between its first day of trading in June and the end of 2017 to close the year at NOK 32.50. As a comparison, the Oslo Stock Exchange Benchmark Index (OSEBX) rose by 16.4 percent over the same period, while the OSE Information Technology Index (OSE45GI) and OSE Software and Services Index (OSE4510GI) delivered returns of 2.9 percent and 7.7 percent respectively. EVRY’s market capitalisation at the end of 2017 was NOK 12.1 billion.

Due to the significant shareholdings held by EVRY’s two major shareholders, Lyngen Holdco S.A.R.L. and funds controlled and managed by Polygon Global Partners LLP (both shareholders prior to the IPO), only a relatively small proportion of EVRY shares are available for trading, and trading volumes were relatively low in 2017. The total number of shares traded in the period between EVRY’s IPO in June 2017 and the end of 2017 was 76.4 million, which is equivalent to 20.6 percent of the total outstanding shares in the company. 561 000 shares were traded on average each day, equivalent to 0.2 percent of the issued shares.

At the end of 2017, the EVRY share was covered by six financial analysts/brokerage houses, two of which are based in Norway. EVRY is committed to providing relevant and complete information and to ensuring that all analysts are always treated on an equal basis. Day-to-day contact with investors and analysts is handled by the EVRY’s Investor Relations department.

EVRY intends to adopt a long-term dividend policy based on a pay-out ratio of more than 60 percent of the Group's adjusted net income. The proposal to pay dividend in any year is further subject to any restrictions under the company's borrowing arrangements and/or other contractual arrangements in place at the time. There can be no assurance that a dividend will be proposed or declared in any given year. If a dividend is proposed or declared, there can be no assurance that the dividend amount will be as contemplated above.

EVRY’s Board will propose to the Annual General Meeting the payment of a dividend for 2017 of NOK 1.25 per share, which represents 44 percent of 2017 adjusted total profit/-loss of the year. The proposed divided for 2017 represents a total payment of NOK 464 million on the basis of the number of shares outstanding at 31 December 2017.

EVRY is committed to providing the financial markets with precise, relevant, timely and consistent information. EVRY has introduced an investor relations policy in accordance with the Oslo Børs Code of Practice for IR as of 1 March 2017. The purpose of EVRY’s IR policy is to ensure that the company complies with all official rules and regulations that apply to financial reporting and communication in the Norwegian financial market, and that it meets market participants’ expectation to be provided with information on a timely and equal basis.

EVRY is committed to open dialogue with market participants, including shareholders, investors and analysts. All information that may be significant, relevant and price-sensitive for the capital markets is distributed in the form of stock exchange announcements published through Oslo stock exchange, as well as media and/or press releases. 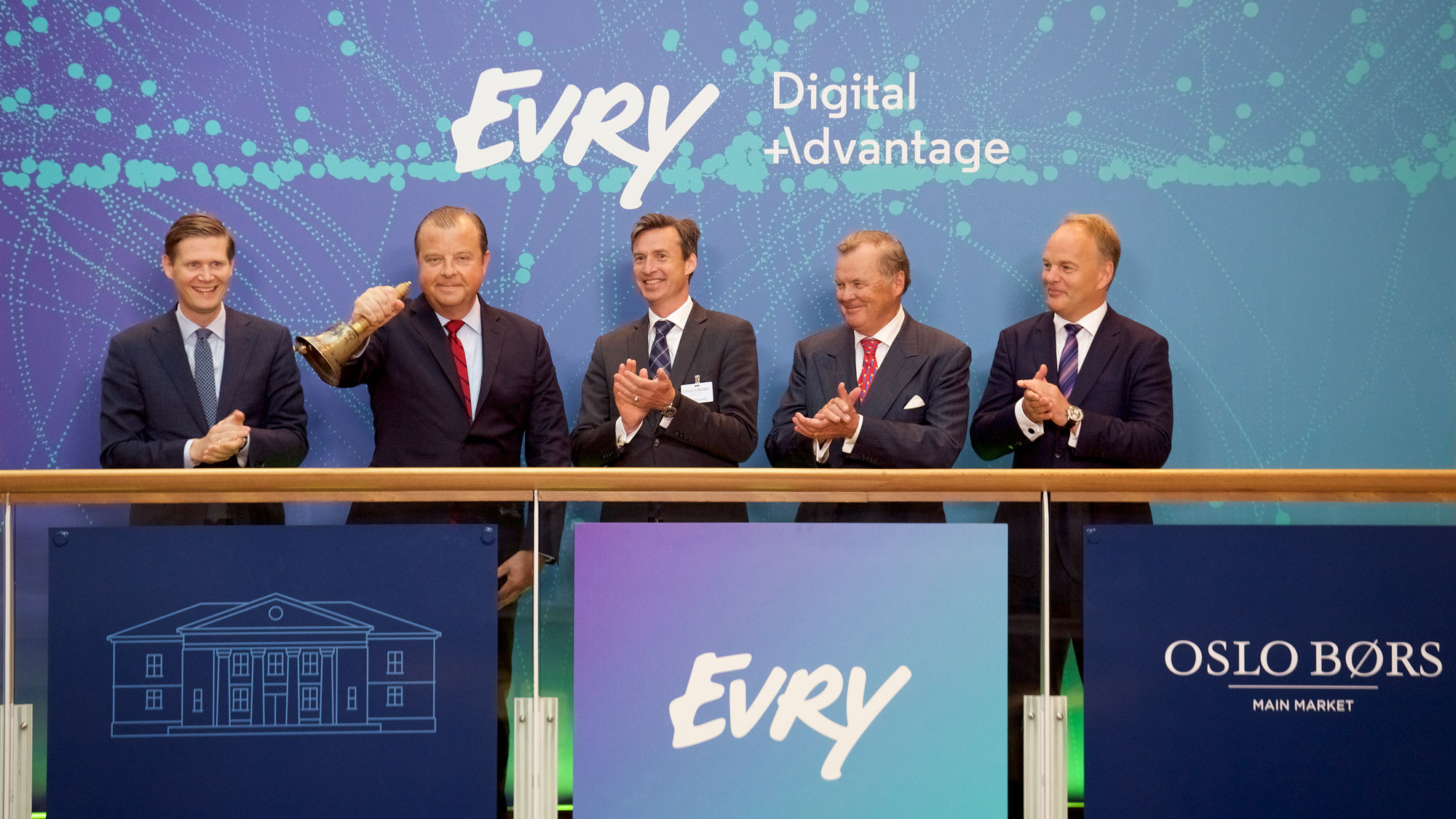 Shareholding distribution by geography at 31 December 2017